Have you ever wondered why Greenland is icy and Iceland is green?

Have you ever wondered why Greenland is icy and Iceland is green?

Have you ever noticed Iceland is green and Greenland is covered in ice when looking at a globe? This strange fact has been a popular talking point and encourages us to dive deeper into the history of each question and ask, why?

As is the case with the naming behind most countries (cue Christmas Island), it’s complicated. It’s difficult to tell exactly what happened because the settlements of each country were so early in history, but we do have an idea.

The Land of Ice and Fire

The country we know as Iceland is in fact a volcanic island grown from the ocean floor (and it still has active volcanoes). Throughout history, a handful of different settlers arrived at the island and changed its name before moving on to another land.

One Norwegian Viking named Floki traveled to the island with family and livestock and settled in the western part of the country. However, his settlement attempt failed when he did not harvest any hay for his animals. The story goes that after his loss, he climbed a mountain in the spring to check the weather where he saw drift ice out in the water and, hence, changed the island’s name to Iceland.

Today, Iceland’s population sits at 320,000 people—approximately two-and-a-half times smaller than Charlotte. Iceland is roughly the size of Kentucky and is one of the least populated countries in the world. Despite its name, only 11 percent of the land is covered in ice caps and it sits just south of the Arctic Circle.

Now let’s travel 752 miles southeast of Iceland to the coast of Greenland, named by Scandinavian settlers. Erik the Red (who was previously exiled from Iceland) named the land in hopes of attracting more people and building a community. Contrary to the nation’s name, 80 percent of Greenland is covered in ice with only the southern portion being green.

Did you know Eismitte, Greenland is the second coldest place on earth? With –85 degrees as their lowest recorded temperature, it is in the category of the coldest places along with Siberia and Antarctica. Despite the incredibly cold environment, approximately 56,673 people reside there. It is also home to some of the most beautiful species on the planet including musk oxen, walruses, humpback whales and more. 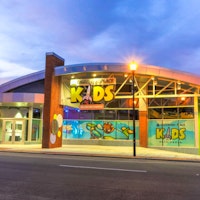